There is a new brand of “plant-based meat” available in Australian Woolworths grocery stores. It’s meant to look and taste just like beef. I bought some and made it into a hamburger in order to test it out. If you want to read up about it, here’s the product website. This post is more of a review/experiment than a recipe, so read more to see I thought when I tried this for the first time. 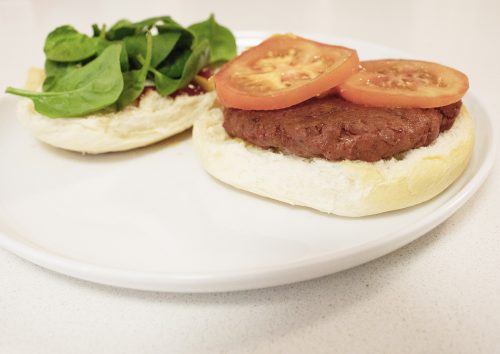 Verdict:
I’d eat this again but with more seasoning. The texture is VERY similar to beef, more so than any other imitation meat I’ve ever had. That bit was really impressive. However the flavour is not like beef at all. It has a clear mushroomy flavour to me, though my husband didn’t pick up on that. It does contain mushrooms so avoid this if you hate the flavour of mushrooms. It has a very slight soy protein taste as well (if you’ve ever had textured vegetable protein, a bit like that). However, it’s not strong and would be fine with more seasoning. It also has some salt in it. It’s not overly salty but definitely don’t add any salt.

In burger format with all its various toppings it was totally serviceable. I think that I’d like to try making it in a “meat” sauce, because the texture is very beefy but the flavour would probably just add a slight umami mushroomy flavour. It’s not any healthier than beef is, at least in terms of calories/kilojoules and fat, but if you’re interested in it for ethical and/or environmental reasons, I’d say give it a try, with the caveat that it needs some seasoning.

The process:
I took the “meat” out of the fridge 30 mins before cooking so I could season it and let it come to room temperature a bit so it’d cook more evenly in the pan. I mixed in 1/4tsp cumin and some cracked pepper. Again, I’d add more seasoning next time. That didn’t do much. It looked and felt remarkably like beef, complete with little fatty bits, though in this case it was made from coconut fat. There is no way to make this look beautiful but here it is. 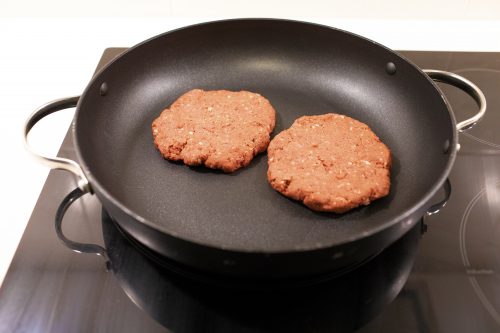 The recipe on the website in the FAQ was very vague, but told me to cook it on medium in a pan the whole time. I could see it getting very dry if you tried to do this on a BBQ so I wouldn’t do that. I would’ve liked it to be crispy, but without any knowledge of what it’d do, I followed the instructions. I also had no idea how long to cook it for. I cooked it for 8 mins on the first side, and 4 mins on the second side, on medium. It was a bit dry so I think it’d do less on the first side. It doesn’t change colour, so looks like raw beef even after it’s cooked. So don’t fall into that trap. It just stays red (the website says it’s coloured with beets). Again, no way to make this look good but here it is. 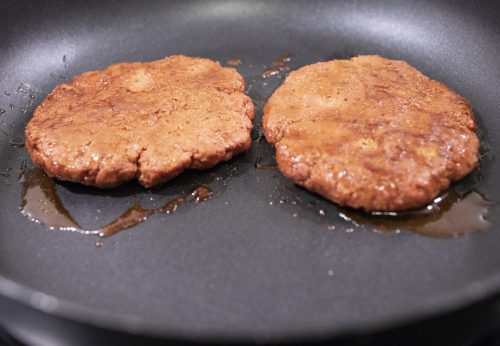 I served it up on a bun with tomato, spinach, mustard and ketchup. There is room for experimentation here so I’ll try again and post an actual recipe once I think I’ve gotten it to reach its potential.